This year’s ARS FENNICA award has been won by the Icelandic artist Ragnar Kjartansson.

The prize is awarded by the Henna and Pertti Niemistö Art Foundation - ARS FENNICA sr. It is worth 40,000 euros and is now being given for the 24th time.

The Director of the Museum Tinguely in Basel, Roland Wetzel, chose the prize winner. He explains his decision as follows:

"This years’ exhibition by the Ars Fennica candidates at Amos Rex in Helsinki is impressive proof of the cutting-edge, vibrant artistic scene in the Nordic countries, represented by five outstanding artistic positions: Miriam Bäckström, Aurora Reinhard, Petri Ala-Maunus, Ragnar Kjartansson and Egill Saebjörnsson. All of them would have deserved to be selected from the shortlist. Everyone’s specific practice opens up a complex, thoughtful examination of aspects of the world we are living in. Therefore, I would first of all like to thank the artists for their excellent contributions and for the chance to engage in insightful conversations with all of them. I also thank and congratulate the donors of the Ars Fennica award, represented by Leena and Kari Niemistö, and Kai Kartio and his team from Amos Rex for the excellent show they have organized.

My choice for the ARS FENNICA award 2019 tries to recognize the presented artworks in the wider context of their creators’ respective art practices. It is at the same time a personal choice inspired by topics that are dear to me: New forms of reconfiguring established modes of representation, humour and irony in questioning conventions, and the relevance of sound and music as "auratic" aspects in creating specific space-time and collaborative experiences.

With his presentation of The Boat, one of nine videos from the Scenes from Western Culture series (2015), Kjartansson addresses core subjects of his versatile artistic practice, which centres around topics and interrelations in music and theatre. The idyllic Swiss mountain scenery of The Boat provides the freeze-frame backdrop for an ever-repeating scene of a couple in love arriving at a landing stage. The heteronormative conventionalism and moral uprightness of the plot are emphasized through a seemingly endless loop in slight, chance-driven variations played off to the point of absurdity.

Kjartansson’s attitude to operating as a minimalistic Trickster is at the core of his manifold practice. The way he exposes himself or other actors as fragile personalities challenging failure, and his ambiguous inclination towards nostalgia and romanticism reflect his authentic and empathic oscillation between "playing" and "being". With his pivotal performances and films about music (making), he emphasizes collaborative work and friendship with a twist towards melancholia and meditation, creating this fascinating and irresolvable tension between the sublime and the mundane."

The ARS FENNICA is Finland’s biggest visual art prize. It is awarded every other year by the Henna and Pertti Niemistö Art Foundation - ARS FENNICA sr. The Foundation was set up in 1990 to promote visual art, to open up new international avenues for Finnish visual art, and to inspire artists in their creative work.

The candidates for the award were chosen by an Award Panel appointed by the Foundation, chaired by Leena Niemistö, MD, with members Museum Director, Kiasma Leevi Haapala, Museum Director, Amos Rex Kai Kartio, and the artist Jussi Kivi.

The ARS FENNICA 2019 exhibition of works by the candidates is open at the Amos Rex art museum in Helsinki until September 8, 2019.

Ars Fennica sr has issued an electronic publication inFinnish, Swedish and English, which can be downloaded from the Foundation’s website: www.arsfennica.fi 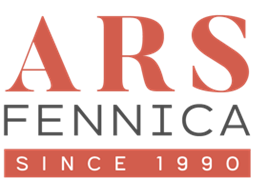 Subscribe to all the latest releases from Henna ja Pertti Niemistön Kuvataidesäätiö - Ars Fennica sr by registering your e-mail address below. You can unsubscribe at any time.

The 2021 nominees for Finland’s most prestigious visual arts award, ARS FENNICA, were unveiled at Hämeenlinna Town Hall on Tuesday, August 17th, 2021. The nominees are:

Representatives of the media are cordially invited to attend the unveiling of the nominees for Ars Fennica 2021, Finland’s most prestigious visual arts award. The press conference will be held on Tuesday, 17 August 2021 at 11am in Hämeenlinna Town Hall (Raatihuoneenkatu 15). The nominees will be in attendance at the event.