“For the Shipping Industry, This Is a Gyro Gearloose Moment” / German Environmental Award for Energy and CO2 Reduction

Osnabrück. With their considerable ingenuity and entrepreneurial courage, the qualified engineers Friedrich Mewis and Dirk Lehmann have revolutionized the shipping world. With the Becker Mewis Duct (BMD), they have not only saved millions of tons of heavy fuel oil since its market launch in 2008, but have also saved around twelve million tons of the greenhouse gas carbon dioxide (CO2) which is harmful to our climate. The German Federal Environmental Foundation (DBU—Deutsche Bundesstiftung Umwelt) is honoring this innovative achievement with this year’s German Environmental Award, one of Europe’s most prestigious awards, which will be presented for the 30th time in 2022. The two engineers will share the total sum of 500,000 euros with the biologist Dr. Christof Schenck. President of Germany Frank-Walter Steinmeier will present the 2022 German Environmental Award in Magdeburg on October 30.

DBU Secretary General Alexander Bonde says that it is extremely important to “bring the shipping industry in line with climate requirements”. After all, international shipping accounts for almost three percent of global greenhouse gas (GHG) emissions. This is more than 1.1 billion tons of CO2 equivalent. In comparison, according to the Federal Environmental Agency, Germany’s annual GHG emissions are 762 million tons. Bonde: “For the shipping industry, the BMD is a Gyro Gearloose moment.” The collaboration between the two engineers is a great example of how fruitful cooperation between cutting-edge research and entrepreneurial courage can be for product innovation. “And their invention, the Becker Mewis Duct, is truly a win-win. It will save fuel, and thus energy, for the shipping industry. Above all, however, it is good for the environment, as it reduces the pollution of greenhouse gases.” In fact, it is calculated that the BMD has saved around twelve million tons of CO2 since 2008—corresponding to approximately the annual CO2 emissions of Tanzania or Hamburg. Bonde explains: “The key factors here are the increase in efficiency brought about by the Becker Mewis Duct and the positive impact on the environment. These will both persist—even if the shipping industry eventually moves to other, more environmentally friendly, fuels in place of heavy oil.”

The collaboration between Mewis (79) and Lehmann (58) dates back to 2001. Mewis had already made a name for himself as an innovator in shipbuilding, while Lehmann was the new head of the medium-sized maritime company Becker Marine Systems based in Hamburg, of which he is still a managing director today. Mewis, who was born in Wittenberg, once home to Martin Luther, in 1943, first worked at the Potsdam shipbuilding research institute after studying shipbuilding, before moving to the Hamburg shipbuilding research institute in 1996, a few years after reunification. After retirement, Mewis continued to work from Dresden as a consultant for shipowners, shipyards and shipbuilding suppliers, and has almost a dozen patents in his name. Lehmann is a proud Hamburger and also has numerous patents. In addition to his main job, he is a shareholder in start-ups working in electric and hydrogen mobility. He is also involved in several organizations, including as Vice-Chairman of Sea Europe, the shipyards’ and maritime equipment association of Europe.

Emergence of a Dazzling Idea

While Mewis and Lehmann initially focused on enhancing rudders for very large container ships, they began working more intensively on other areas from 2007 on. It all came down to the question of how the efficiency of large, slow, “full-form” ships could be increased—from tankers to bulkers, in other words bulk carriers for ore, grain, and other materials. Container ships were subsequently also added. Mewis: “All the technical tricks had actually already been invented.” At some point, however, he came up with a dazzling idea—to combine different, already existing, components. The Becker Mewis Duct was thus born—a hydrodynamic energy-saving duct positioned in front of the propeller, or an “energy-saving device”, as it is referred to in technical speak. Weighing up to 60 tons, and with a diameter of up to seven meters, it is produced in two halves that are welded together on the ship. Lehmann believed strongly in this invention, pressed ahead with it with great passion, convinced doubters, and overcame the necessary red tape. This is how he explains the BMD in layman’s terms: “A ship is like a shoe box being pushed through the water. At the front, there’s a wave, and at the back, the water doesn’t know where to go.” Mewis set his sights on this “wake field”. Lehmann: “It’s like cutting a yogurt pot crosswise and positioning it behind the box as a funnel—and in front of the propeller. This bundles the water together.”

As a technical refinement, asymmetrical flow-guiding parts, known as fins, were integrated into this front duct. In short: the working principle for the Becker Mewis Duct. Lehmann: “The result is a negatively generated swirl in the opposite direction to the propeller rotation.” This is the prerequisite for the Becker Mewis Duct to ensure more effective ship propulsion, to reduce the consumption of heavy fuel oil by up to ten percent, and thus to protect the environment from greenhouse gases. A positive side effect: quieter ships and thus less noise pollution for marine life such as whales. The Becker Mewis Duct has so far been installed in 1,400 vessels worldwide, with 300 more soon to follow. The two award winners regard the German Environmental Award as a “great honor”. Lehmann also hopes that politicians will put “zero emissions in the shipping industry at the top of the agenda”. 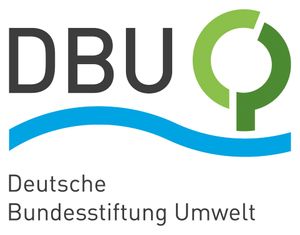 Subscribe to all the latest releases from DBU Deutsche Bundesstiftung Umwelt by registering your e-mail address below. You can unsubscribe at any time.

Osnabrück/Darmstadt. Today (Sunday) in Darmstadt, the German Federal Environmental Foundation (DBU) honoured exceptional efforts in the fight against climate change and to protect biodiversity with one of Europe’s most prestigious and highly endowed environmental awards. German President Frank-Walter Steinmeier presented the German Environmental Prize to ecologist Prof. Dr. Katrin Böhning-Gaese (56) and peatlands researcher Prof. Dr. Dr. h.c. Hans Joosten (66), who will be splitting the award, which comes with a remuneration of EUR 500,000. “The award recipients give us hope, because they have shown us the tools we can use to fight climate change and the species extinction crisis,” said Rita Schwarzelühr-Sutter, head of the Board of Trustees of the DBU. DBU Secretary General Alexander Bonde emphasized the award winners’ dedication: “We need an awakening for more climate protection and species conservation.” Further information about the German Environmental Prize 2021 to be found at ht

Hannover/Osnabrück. German President Frank-Walter Steinmeier recognised the German Federal Environmental Foundation’s German Environmental Award as “a particularly important message” for us not to lose sight of “other major challenges facing mankind” in the midst of the COVID-19 pandemic. The award, which comes with a remuneration of EUR 500,000, is one of Europe’s most prestigious environmental awards. This year it was split equally between climate economist Prof. Dr. Ottmar Edenhofer and the siblings Annika and Hugo Sebastian Trappmann, Managing Directors of Blechwarenfabrik Limburg. Entomologist Dr Martin Sorg received an Honorary Award, which comes with EUR 10,000 in prize money.

Hannover/Osnabrück. Today (25 October 2020), the German Federal Environmental Foundation’s German Environmental Award, which has a remuneration of EUR 500,000, is being presented for the 28th time at the HCC Hannover Congress Centrum.