Nuuks.io is a Flow blockchain based service where ecological actions can be created and donated. Nuuks.io is holding an expo of ecological non-fungible token (NFT) actions in Helsinki at the Galleria Struggle Lab on 24 and 25 November. An NFT created by Kalle Palander is among the exhibition items.

We all love nature and many of us consciously do good deeds and make choices for the good of the environment. Nuuks.io wants to bring the impact of this kind of grassroots environmental action into the public eye via their service, where anyone can create their own, unique NFT work out of their ecological action.

“We want to create a snowball effect where we inspire people to take ecological action, share them, and inspire others at the same time to make informed choices for the environment,” says Sanna Reunanen, one of Nuuks.io’s founders.

Do it yourself or support others

The beta version of the service was launched in October 2022, and now anyone can easily create their own NFT in the Nuuks.io service and, if they so choose, donate it forward. In the future it will also be possible to purchase and sell actions.

“Each responsible act—picking up trash in nature, swapping one’s car for a bicycle, or changing to a vegetarian diet—uploaded to the service is a step toward a better future. With our service, we want to make visible how individual acts have a cumulative total effect,” Sanna encourages people.

The NFT ecological actions created through the service can be gifted or they can be used to build a collection.

“Nuuks.io allows people to give value to actions they themselves value. It’s possible, for example, to support a group of friends who are setting up nest boxes in the neighbourhood. Or if, for example, a neighbour is volunteering to maintain cleanliness of a nearby park, the action they have created can be bought into their collection and give value to it this way,” says Reunanen .

“Each action or acquisition of one is an investment in nature,” she emphasises.

For the love of snow: Kalle Palander gave up his car

Kalle Palander, one of the many Nuuks.io NFT creators, saw with his own eyes over the course of his sports career how glaciers keep shrinking year after year. He gave up his family’s second car in order to downsize his own carbon footprint.

“Earlier, I didn’t really think about environmental issues, but over the past few years, discussions with my children have taught me and awakened me to seriously consider climate change,” says Palander.

Nuuks.io’s own environmental impact has been minimised by basing the service on Flow blockchain technology, which is an energy-efficient proof-of-stake technology. Creating a single NFT only consumes the same amount of energy as a single Google search or creating an Instagram post.

“Our mission is to be a part of the solution for the climate crisis by utilising the possibilities created by blockchain technology”, Sanna sums up.

Nuuks.io is open to all at the Galleria Struggle Lab on Fredrikinkatu 30on 24 and 25 November. You can meet the service developers between 12:00 and 16:00. 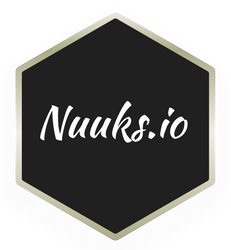