The presidents will discuss, among other things, questions concerning the rule of law in Europe, as well as the cooperation between the ECHR and the highest courts of Finland and its further development. Presidents Leppänen and Kuusiniemi will also announce the willingness of the highest courts of Finland to join the network of superior courts of the member states of the Council of Europe (Superior Courts Network), maintained by the ECHR.

The network enriches dialogue and cooperation in judicial matters concerning the interpretation of the European Convention on Human Rights between members of the network.

During his visit, Mr. Spano will also meet with Minister for Foreign Affairs Mr. Pekka Haavisto and Minister of Justice Ms. Anna-Maja Henriksson, as well as with representatives of the National Courts Administration. Mr. Spano’s visit is hosted by the Finnish foreign ministry. 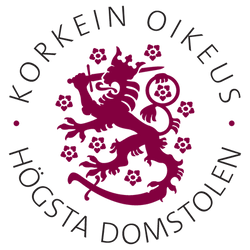 The Supreme Court exercises judicial power as the final instance in civil and criminal matters and supervises the judicial procedure within its field of competence. The most important function of the Supreme Court is to establish judicial precedents.

Subscribe to all the latest releases from Korkein oikeus / Högsta domstolen by registering your e-mail address below. You can unsubscribe at any time.